Have you ever wonder how transition lens work? 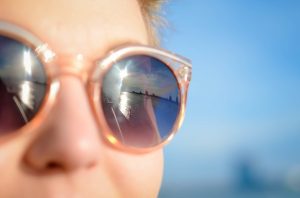 These photochromic lenses darken when exposed to bright light and will gradually return to their clear state in the absence of radiation when one walks indoors. They are good substitutes of sunglasses as they can reduce up to 80% of the transmitted light.  The change in colour in response to light can be explained by redox reactions.

During the manufacturing process, silver chloride (AgCl) and copper(I) chloride (CuCl) crystrals are added to the molten glass in its molten state and these crystals are evenly distributed in the glass.

Silver chloride is susceptible to undergo redox reaction in the presence of light as described below:

The chloride ions are oxidized to produce chlorine atoms and an electron. The electron is then transferred to silver ions to produce silver atoms. These atoms cluster together and block the transmittance of light, causing the lenses to darken. This process is reversible which allows the lenses to become transparent again.

The presence of copper (I) chloride reverses the darkening process. When the lenses are removed from the light, the following reactions occur:

The chlorine atoms formed by the exposure to light are reduced by the copper ions, preventing their escape as gaseous atoms. The copper (+1) ion is oxidized to produce copper (+2) ions, which then reacts with the silver atoms:

The effect of these reactions is that the lenses become transparent again because the silver and chloride atoms are converted to their original oxidized and reduced states.

This is just one example of Chemistry in our daily life. Find out more about how Chemistry applies to everyday occurrences in Ms Sim’s A Level Chemistry tuition class.

About The JC & IB Tuition Specialists: We are formed by a group of dedicated tutors who specialize in providing H2 Chemistry tuition, H2 Maths tuition, and H2 Physics tuition in Singapore.